Angels – not just for Christmas! 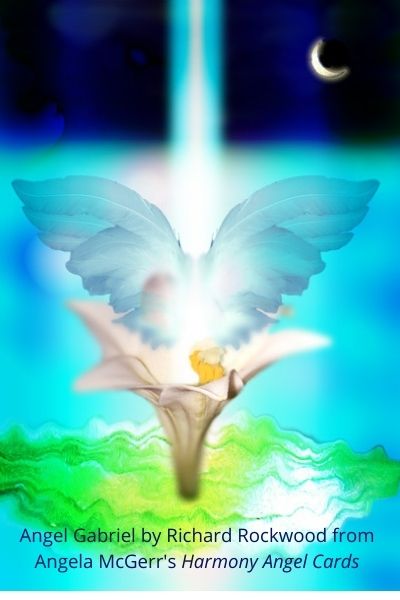 This morning, as the last lyrics of ‘Hark the Herald, Angels Sing’ faded away on my car radio, I was briefly transported back to 1998. I could hear my Reiki teacher recommending that I call in the Parking Angel should I need to a manifest a space in an overflowing car park. Frankly, at the time, I thought she‘d lost the plot; as surely angels were ‘just something for Christmas’.

Describing myself as spiritual rather than religious, I can appreciate the supportive role institutional religions can play in the community but personally I’ve never felt aligned with the strict doctrines to which some faiths expect believers to comply. So, on reflection, I wonder whether that was my initial resistance to involving angels in my life.

I’m embarrassed to admit, that at the time, I found the beaming, winged and chubby pre-Raphaelite image of Caucasian angels a little hard to take seriously other than as an adornment on the annual festive greeting cards.

My sister Angela McGerr was on the same 1998 Reiki Mastery course. Her attitude was markedly different to mine. She told me later her first reaction was not to ‘call in’ anything that she couldn’t fully understand. So, she decided to investigate them. And that’s exactly what she did, almost obsessively for the next 18 months. In fact, she later admitted that she suspects she was hi-jacked by the angels themselves to create a way of making angels accessible in today’s fast-paced society.

17 years later, in 2015, Angela’s 10th angel book was published, and with cumulative sales nearing one million copies, she was firmly established as a UK best seller in this niche market. She’s since retired from designing angel card sets and writing books but continues to be involved with all things angelic.

So how did she win me round? Initially my ‘interest’ was purely sisterly support of her growing fascination and success, and I was still lukewarm (to say the least) on a personal level. But over time, I came to appreciate the accuracy of her angel readings and their loving support in my life. Now they are an important feature of my mentoring programme and practitioner teaching courses.

The first step was to realise that angels have a much longer history of interaction with humanity than we might think, they certainly pre-date most of our contemporary organised religions.

Many people are familiar with the angels in the Christmas story, especially Gabriel, central to the story of the birth of Jesus Christ in the Christian faith. However, Gabriel also appears as an archangel in the Jewish faith, first described in the Hebrew Bible.

The traditional Shema prayer of the Jewish faith sites Gabriel as one of four archangels called on for protection through the night. A translation would be:

“Michael to my right side, Gabriel to my left, Uriel before me, and Raphael to my back.”

Indeed, Muslims assert that the Quran was orally dictated by God to the final prophet, Muhammad, through the Angel Gabriel (known to them as Jibril). They believe this took place, in stages, over a period of some 23 years, commencing when Muhammad was 40, in month of Ramadan; and concluding in 632, the year of his death.

The Nativity is where many people of the Christian faith, whether Protestant, Catholic or other (or no faith!) will first be introduced to angels. Gabriel is one of the most sought-after parts in any school Nativity!

Returning to the aforementioned cherubic angel images, these are purely representations by the artists of the time so that they could tell a visual story, both in murals and fine examples such as the celebrated fresco on the ceiling of the Sistine Chapel in Rome, Italy.

Where did that idea come from? And why are they so often blond and Caucasian in appearance?

Leaving aside the politics of the time, and possible colonial influence, these depictions were an attempt of the current popular culture to represent beings that are much, much older.

The concept of angels predates Christianity by more than 4000 thousand years. Winged figures were depicted in the earliest recorded civilisation (Sumeria, circa 4000 BC) and Colonel Churchward reported the first glyph representations of angels as being even earlier, in Lemuria, though the existence of Lemuria is not universally accepted. It seem that the term angelology, stems from the Essenes, a healing sect living in the Dead Sea area contemporary with Jesus.

It may be that our conventional interpretation comes from our brain’s need to recognise what it is seeing as a familiar sight – a bright light surrounding a ‘floating and wraithlike being’ may well be interpreted as a halo and wings. Perhaps this even started with Mary herself, in her attempt to explain what would have been an almost impossible experience to relate to others.

So, what are angels?

My personal interpretation of angels is as ethereal light beings, a construct shared by many others including my sister Angela, who chose to represent angels in her Harmony Angel Cards and other richly illustrated publications (sadly mostly now out of print, though I still have some signed unused and pre-loved editions available at the Harmony Shop) as images blending the colours and talismans associated with each angel in folklore with the suggestion of feathered wings, rather than humanoid depictions.

That’s not to say that any other representations are of any less value – perhaps the angels themselves chose to represent themselves in a way that we humans could connect with, as one consensus that most people can agree on is that angels are benevolent and seek to help us.
On the whole, they are androgenous beings, though some carry more masculine or feminine traits than others. Did you know, that despite our traditional view, Gabriel may well represent more of a feminine energy than a masculine? Gabriel is in fact the Angelic Guardian of the moon and Mondays (the weekdays governed by the moon). In mythology, whereas the sun is depicted as masculine, the moon is viewed as a feminine energy.

Perhaps this is a particularly good time of year to call on angels to assist you with finding peace, and with receiving and offering good will. Especially this year when everything is in turmoil and constant flux.

However, you can in fact call on angels to assist you at any time of year, provided it’s for the highest good and you are respectful and appreciative of their loving intent, hence not asking them for anything which would harm others.

To find out more about connecting with angels in your day-to-day life, you can join us for our New Year New Vision mentoring course.

Since this programme is aligned to a full lunar cycle, naturally Gabriel will have a prominent role. We work though the 28 Mansions of the Moon and concentrate on the attributes of each lunar phase to help us overcome hurdles and embrace new opportunities. During the course, you will be enriched with a deeper sense of how to immerse with nature whilst aligning your soul with the lunar cycle and the Pagan Wheel.

Assisted by angelic helpers, and building on tools including crystalline energy, vision boards and powerful healing techniques, you will feel reborn for the new year, with new focus, new energy and new divine intent. Starting on 13th January – A new moon and time for powerful new beginnings!

Details at Joanna’s Harmony Healing website or direct from https://bit.ly/NewYearNewVision2021.

In the meantime, I’ll take this opportunity to wish you a happy, peaceful, and loving time, whatever your belief system and celebrations may be.

By Joanna Bristow-Watkins|December 21st, 2020|Categories: Guest Articles|Comments Off on Angels – not just for Christmas!

Harmony Healing
Joanna is a professional and accomplished speaker on Reyad Sekh Em; Khemitology (Ancient Egyptian philosophies according to the indigenous wisdom keepers); Forest Bathing+; the Violet Flame of Amenti; multi-dimensional realities; sacred journeys; stress management; past lives; meditation & relaxation; etheric devices; sound healing with voice & tuning forks; merkabas, lifestyle and diet; self-help for cancer patients. She is very happy to give talks and demonstrations within clubs, societies, corporate and domestic environments. FInd Out More
FacebookTwitterLinkedInEmail
Page load link
This website uses cookies and third party services. By using this website you are agreeing to the use of cookies. For more information please read our Privacy Policy. Okay